Once the work goes out of my studio, it finds new contexts and meanings
in viewers’ minds. It’s fascinating to hear what they see.  Last March, I
enjoyed an architect, Saurabh Vaidya’s blog post that showed the work
through his rich, investigative mind.  He just posted his second entry on
the work.  Here are his 1st and the 2nd entry posted back to back:

I came across works by two very interesting artists last week,
Nicolas Moulin who envisages ruins of mega monolithic concrete
blocks in a deserted landscape while the other being Hiroyuki Hamada
who designs comparatively small, vaguely futurist looking monoliths. 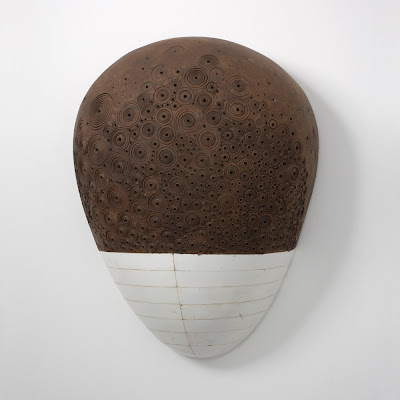 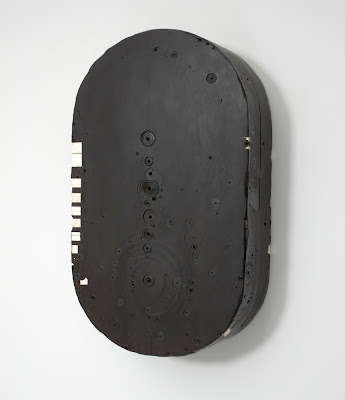 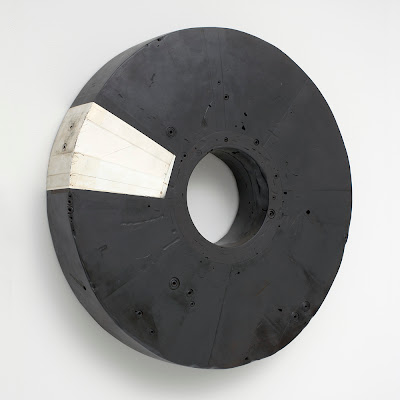 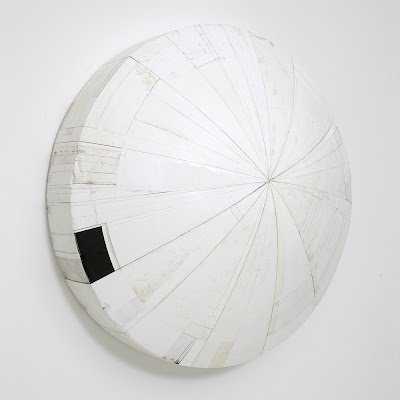 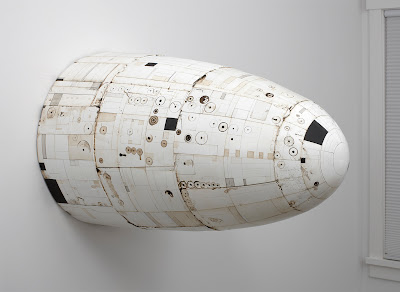 (Some of the many Hiroyuki’s tablets that could easily come to be a parts of totem pole
of a dystopian space age civilization, whose technological advancement has come at
the price of erosion of memory of history and language…where technology is god.
Images sourced from: http://acidolatte.blogspot.com/2010/02/hiroyuki-hamada.html?zx=883872d53fad4dd5)
Hiroyuki’s artifacts that seem to draw semantic nourishment from manga,
minimalism, space debris, Japanese Zen, Buddhism, God particles,
Shivalingam, crustaceans, Mars and brush by closely to Nicolas’s Béton
Brut work that sends roots to Normandy Bunkers, Corbusier, Oplismeno
skirodema, Berlin Wall, Moai, Rosetta stone, Noah’s Arc etc according
to me are not thriving on but are just the opposite. They are soil samples
of the very ground that anchors the tree of Being, from where all these
references germinate. 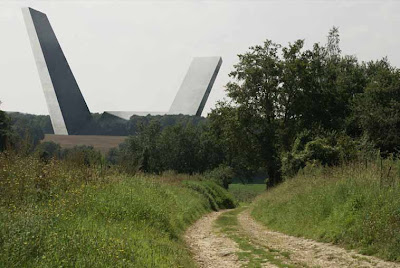 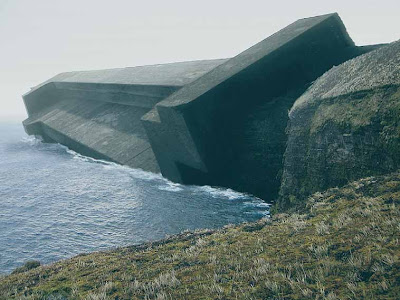 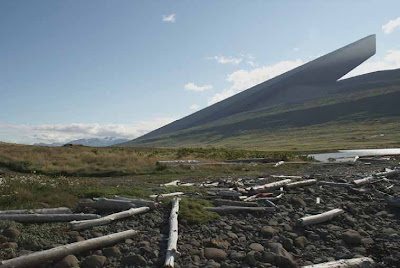 (Images of Nicolas Moulin’s collages sourced from Vulgare one can also find an online
blog recording by the artist and Amanda Crawley Jackson called Beton brut)
The ability of both these artist to have art works that spread roots
through history and simultaneously come across as being so basic
that it forms a part of Lebenswelt, the very ground of universality
which anchors the roots of metaphysics, to be understood in equal
ways by every member of the human race is according to me the
true essence of their work.
Scale, texture and form, that is all to it, as wise old university
stalwarts would put it, which according to me has more truth to it
than the combined cacophony that we seem to have inherited from
the circus that was post modernism and these two artists working
independently in different circles and continents seem to echo just
that. The simplicity of works is refreshing and it just looks very
very sexy.

During my early days in architecture all of us during a brief phase
had taken to worshipping Tadao Ando, which secretly we still do in
some obscure corner of naivety unpolluted by the realisation that
it cannot be that simple, life is far more complicated, filled with
contradictions that need to be represented in our spaces, objects,
skews and corners. Ando had been popular for quite sometime
then but it was during my first year in Architecture that he built
Church of the Light a building that worshipped space, made
concrete an inch more beautiful than what the modernist had left it
as and we drooled. 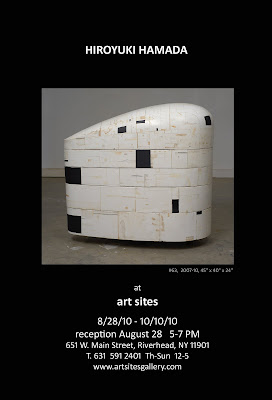 It is this rich simplicity that draws me to Hiroyuki’s work of which I
have written before.  Hiroyuki will be exhibiting three new pieces in
his next show at Art Sites, a gallery in Riverhead, NY. If you are
the lucky few around do visit…I personally would like to see the
scale of these objects…and if they open up like loosely held 3d
jigsaw puzzles, or do they crack like egg shells, are they hollow
or filled with a heavy fluid, is there a temperature difference in the
blacks and whites, browns and greys…I guess I will definitely be
banned from entering the gallery or his workshop!
I hope the art work sells and and pray definitely not to clients who
would use it as bourgeoisie conversational props with their boring
guests in plush living rooms with matching minimal aesthetics.